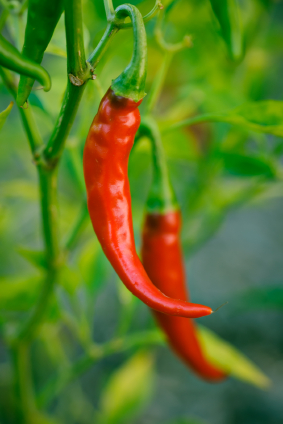 Hot peppers need hot weather in order to flourish. Here is a breakdown of when to plant hot peppers for each region of the U.S.

They will not tolerate any frost and cold spells can stunt growth and inhibit them from bearing fruit. Soil temperatures should be 75° F – 85° F for successful germination. Air temperatures should be 70° F – 85° F for ideal growth and ripening. Depending on the variety, hot peppers will need between 60 and 120 days to mature. For best results, hot peppers must be planted indoors 6-8 weeks prior to the last frost for your area. Direct sowing hot peppers is only possible in tropical climates, but is not ideal. Transplants should be set out about 3 weeks after the danger of frost has passed and once daytime temperatures are consistently at least 70° F.

ALASKA
Alaska does not have the warm temperatures and long growing season required to successfully grow hot peppers outdoors. They should only be grown in a greenhouse in this region.

CENTRAL/MIDWEST
Sow hot pepper seeds indoors in March and April in the Central/Midwest region. Transplant them outside in late May and June.

GULF COAST
Hot peppers grow extremely well in the hot, humid environment of the Gulf Coast. For best results, start them indoors in July so they may mature in the slightly cooler conditions of the fall. This is the one region where you may be able to direct sow them, in mid summer when soil temperatures are nice and toasty.

MID-ATLANTIC
Plant your hot peppers inside any time from February-April in the Mid-Atlantic. Transplant them outside when they are about 8 weeks old. Be sure the danger of frost has long passed.

NEW ENGLAND
You’ll need to take some care to successfully grow hot peppers in New England but it can be done. Sow seeds indoors in April and May. Transplant healthy seedlings outside only once daytime temperatures consistently exceed 70° F, usually in May and June. You may want to have row covers on hand to protect them from cold nights and be sure the cultivar you choose has time to fully mature before the fall frost.

NORTHERN CENTRAL & ROCKIES
Growing hot peppers in the Northern Central and Rockies region can be a gamble. Late cold spells and sudden frosts can damage or kill your plants. It is essential to start them indoors in March, April or May. Use plastic mulch to warm the soil before transplanting them outside in June. Be sure to have floating row covers on hand should temperatures suddenly drop at night.

PACIFIC NORTHWEST
In certain parts of the Pacific Northwest, growing hot peppers may not make sense. They will not likely thrive along the coast or in northern Washington. If you live in the hotter parts of the Willamette Valley and southern Oregon you may have success. Plant them indoors in March and April and transplant them outside only once temperatures are consistent and regularly over 70° F. You may need to warm the soil with plastic mulch and provide row covers to extend your growing season enough for them to mature before the summer ends.

SOUTHERN INTERIOR
Hot peppers will find an ideal environment in much of the Southern Interior. Get seeds going indoors in February and March and transplant healthy, 8 week old seedlings outside in April or May.

SOUTHWEST
The southwest can be a great region for growing hot peppers. Start them indoors in February and transplant them outside in April or May.

TIPS & ADVICE
Most varieties of hot pepper seeds take about 2 weeks to germinate.

Hot peppers flourish when temperatures are 85° F during the day and 70° F at night.

Hot peppers should not be left to mature in temperatures that exceed 90° F or they may not set fruit.

Hot pepper seedlings must be introduced to the outdoors gradually. Harden them off by leaving them outside in their pots during the day only for 7-10 days. Increase the time they spend outside each day. On the last day, leave them in their pots overnight and transplant them into the ground the next morning.

Alternatively to sowing your own hot peppers seeds indoors, purchase healthy seedlings from a reputable nursery when it’s time to transplant.

Do you have suggestions or questions about when to plant hot peppers in your region? Let us know in the comments section below.