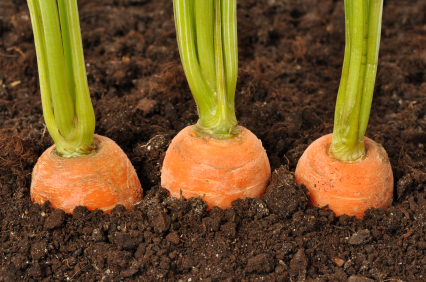 Here’s a breakdown of when to plant carrots for every region of the U.S. Carrots can be planted and successfully grown in every region of the United Sates, though they tend to prefer cooler temperatures averaging 60° F – 75° F. Carrot seeds are best when planted 2 weeks prior to the last frost of the spring or 2 – 3 months before the first frost of the fall, depending on the days to maturity for any particular variety.

ALASKA
Plant carrots as soon as the ground can be worked in your particular area in Alaska. May and early June are generally best. Warm the soil with plastic mulch and/or plant in raised beds. You’ll want to choose a variety that has proven hardy in Alaska and can be harvested before it gets too cold late in the summer.

CENTRAL/MIDWEST
You can direct sow carrot seeds outdoors anytime from April until September in the Central Midwest.

GULF COAST
Get your carrots in the ground in March if you live along the gulf coast. You’ll want them to mature when the weather is still relatively cool. Plant again in September for a late fall harvest.

HAWAII
Carrots can be planted in the cooler highlands of Hawaii. You can plant them year round, but it is best to choose the coldest part of the year. Pick a variety proven to thrive in your area and start sowing seeds in October.

MID-ATLANTIC
Carrots can be planted in the Mid-Atlantic from March through September. They’ll do best when it’s still cool in the early spring or when harvested in the fall before the frosts.

NEW ENGLAND
Plant carrots anytime March-August in New England. Wait until the ground thaws and about two weeks before the last anticipated frost for your specific area to sow seeds. For fall crops, get them planted by the end of August for best results.

PACIFIC NORTHWEST
The Pacific Northwest is a great region for growing carrots. Plant seeds as early as April, as late as August or any time in between for most parts of this region. Check frost dates for your specific area as this can range greatly from the ocean side of the Cascades to the valley.

SOUTHERN INTERIOR
In the Southern Interior, you can have two carrot harvests, both spring and fall. Plant seeds in February, March and April and again in July, August and September.

SOUTHWEST
For spring crops, plant carrots in February, March and April in the Southwest. For fall crops, don’t plant again until you know the heat will subside by the time they mature. Try August and September for fall crops.

TIPS & ADVICE
Check your frost dates for fall crops and compare to the days to maturity for your particular variety to be sure they have enough time to mature before it gets too cold.

Avoid growing carrots during the hotter parts of the year if you live in regions where temperatures exceed 85° F.

Do you have tips on when to plant carrots for your particular region? Let us know in the comments section below.