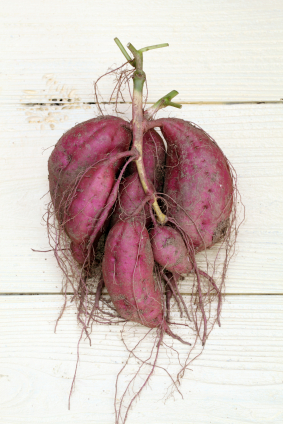 Here’s a guide for when to harvest sweet potatoes for each region of the United States. Sweet potatoes need 100-140 days in the ground to mature. They are ready to harvest once temperatures drop to about 55° F, usually in the fall. The tubers should be ready to dig up at this point. Harvest all tubers before the first frost of the autumn.

ALASKA
Sweet potatoes will not likely thrive in Alaska. If you take the risk, you might see some edible tubers in early September.

CENTRAL/MIDWEST
In the Central/Midwest, plan to harvest sweet potatoes in September and October, though harvest may begin in August. The further north in this region, the earlier you may need to dig them up.

GULF COAST
Sweet potatoes may be ready to harvest as early as August in the Gulf Coast region. Harvest can typically stretch into November if you have planted later in the summer.

HAWAII
Harvest sweet potatoes year round in Hawaii. They can be grown as such as well, but be sure to take note of your planting dates to plan your harvest appropriately.

MID-ATLANTIC
In the Mid-Atlantic, sweet potatoes are typically harvested from early September until the end of October.

NEW ENGLAND
Sweet potatoes can be harvested in September and the first part of October in New England. Some tubers may be ready in August in parts of this region as well.

NORTH CENTRAL & ROCKIES
In the North Central and Rockies, sweet potatoes may not yield much of a harvest. In areas of this region where gardeners are successful, dig up mature tubers in September and early October.

PACIFIC NORTHWEST
While the Pacific Northwest is not the ideal region for growing sweet potatoes, successful gardeners will harvest mature tubers from September – November.

SOUTHWEST
Harvest sweet potatoes as early as June and July in some parts of the Southwest. However, August-November will be the best time to harvest mature tubers for most of this region.

Sweet potatoes must be cured before they can be eaten. Freshly harvested sweet potato tubers do not taste right. Store them in a warm space for at least five days at 85° F – 90° F. If temperatures are cooler, store them for 10-25 days. They’ll develop a thick extra skin ideal for long term storage. Afterwards, store them for at least another month in a well-ventilated area, with temperatures around 60° F before eating.

Take great care not to damage the sweet potatoes by bruising or puncturing the skin during harvest.

Sweet potatoes are sometimes referred to as yams but they are not the same vegetable.

Do you have tips on when to harvest sweet potatoes in your region? Let us know in the comments section below.