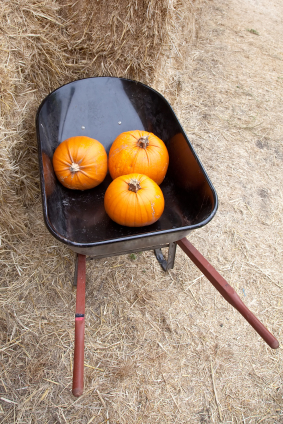 Here’s a guide for when to harvest pumpkins for each region of the United States. Pumpkins come in many different colors and sizes and are best not harvested until they reach their intended size. It is easy to tell when pumpkins are ready if you know how big and what color they are supposed to be. They’ll develop their full, solid color (which is orange for most pumpkins) and size when they are ripe. They’ll also feel hard to the touch and sound hollow if you give them a thump. While they are typically ready around Halloween, pumpkins can take anywhere from 75-120 days to mature and this can vary from region to region.

ALASKA
Pumpkins are best harvested in September in most of Alaska. However, in some parts of this region they may be harvested in October.

CENTRAL/MIDWEST
Harvest pumpkins in September and October in the Central/Midwest.

GULF COAST
In the Gulf Coast, pumpkins can be harvested from September-December, depending on when you plant. Most will be picked in time for Halloween. Mid summer heat can make growing pumpkins to harvest any earlier difficult in this region.

HAWAII
Pumpkins can be grown and harvested year round in Hawaii. Most will be planted to harvest in October for Halloween, but take note of your planting date and harvest accordingly.

MID-ATLANTIC
Harvest pumpkins in September and October in the Mid-Atlantic.

NORTH CENTRAL & ROCKIES
September is the best month to harvest pumpkins in the North Central and Rockies. Parts of this region may see harvest extend into October as well.

PACIFIC NORTHWEST
Harvest pumpkins from mid September – November in the Pacific Northwest. Northern California may see pumpkins ripen by the end of August while Washington and the cooler areas of this region may not see pumpkin harvest last past September.

SOUTHERN INTERIOR
Pumpkins may be harvested from mid September until mid November in much of the Southern Interior. For most of this region, plan to harvest pumpkins in October.

SOUTHWEST
Harvest pumpkins from August – November in the Southwest.

TIPS & ADVICE
Use shears or clippers to cut pumpkins off the vine. They are best with about 3 inches of stem left attached.

Pumpkins should be cured in the sun after harvest for about a week. This will allow them to develop a thick, outer layer. Store them in a cool, dark place to preserve their post-vine life.

Harvest times for pumpkins may vary by 2-3 weeks in any given year based on varying climate patterns.

Be sure to note the ‘days to maturity’ for your particular type of pumpkin when planning to harvest, because they can vary by more than a month.