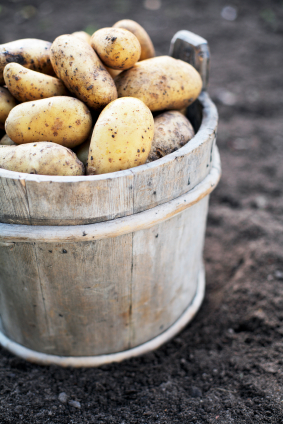 Here’s a guide for when to harvest potatoes for each region of the United States. Potato greens sprout within 2-3 weeks after planting and the tubers mature in about ten weeks. Harvest after the plants finish flowering and once the foliage starts to die off. While they prefer cool temperatures, potatoes should be harvested before the first autumn frost. In hot climates, harvest potatoes before temperatures reach 90° F.

CENTRAL/MIDWEST
Harvest potatoes as early as June in the Central/Midwest, though for most of this region they will not be ready until July.

GULF COAST
In the Gulf Coast, potatoes should be harvested in May before temperatures get too hot.

HAWAII
Harvest potatoes year round in the highlands of Hawaii. In the hotter, lowlands they are best dug up in December and January. Plan to harvest about ten weeks after planting.

MID-ATLANTIC
Potatoes are usually ready to harvest in June and July in the Mid-Atlantic region.

NEW ENGLAND
Harvest potatoes as early as July in New England, though some may not be ready until August.

NORTH CENTRAL & ROCKIES
In the North Central and Rockies region, potatoes should be ready to harvest in July or August.

PACIFIC NORTHWEST
Potatoes can be harvested as early as May in some parts of the Pacific Northwest, though most areas will see them mature in June and July. Planting later in the spring is acceptable in this region as well, so these potatoes will likely be ready in August.

TIPS & ADVICE
Harvest potatoes on a dry day. Be sure do not puncture or damage the tubers when digging them up.

Harvest any remaining tubers once the potato vines die. Tubers left in the ground too long will rot.

Brush off the soil after digging them up and store them in a cool place, but don’t wash potatoes until you are ready to eat them.