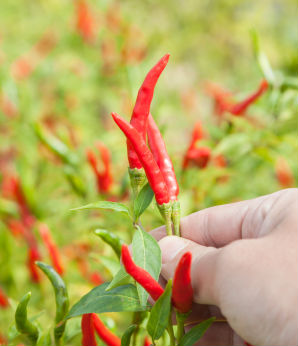 Here’s a guide for when to harvest hot peppers for each region of the United States. Most hot peppers, such as jalapenos and habaneros, will take anywhere from 60-120 days to mature, depending on the variety and growing conditions. Hot peppers turn from green to their bright, natural color once they are ripe. Most will be red or orange. Harvest all hot peppers before the first frost of the fall. While they like lots of warmth, hot peppers may not set fruit (or stunt) if temperatures exceed 90° F.

ALASKA
Summers in Alaska are just too cold and too short to expect a hot pepper harvest.

CENTRAL/MIDWEST
Hot peppers may mature as early as June in the Central/Midwest if started indoors by March. However, most varieties will be ready to be picked in August.

GULF COAST
Harvest hot peppers in the fall for best results in the Gulf Coast. Fast maturing varieties may be ready in September, but most will be picked in October and November. Spring planted hot peppers may be harvested in June before the weather becomes too hot.

HAWAII
You can harvest hot peppers year round in Hawaii. They’ll likely be best when picked from November-February.

MID-ATLANTIC
Hot peppers should be ready for harvest by June in the Mid-Atlantic. Pick them all summer long. Give them plenty of water if temperatures reach 90° F.

NEW ENGLAND
In New England, hot peppers are a gamble to grow. If you have any luck, they’ll be ready to harvest in July and August.

NORTHERN CENTRAL & ROCKIES
Hot peppers are tough to grow in the North Central and Rockies region. With some luck, you’ll have peppers that mature in July and August.

PACIFIC NORTHWEST
Hot peppers will likely only set fruit in the warmest parts of the Pacific Northwest. Harvest in July and August.

SOUTHERN INTERIOR
In the Southern Interior, harvest hot peppers from May-October. Be sure to provide lots of water if temperatures reach 90° F. They may halt production during extreme heat, but will likely continue to set fruit once temperatures cool.

SOUTHWEST
Harvest hot peppers as early as May in parts of the Southwest. June and July should be peak harvest time in this region.

TIPS & ADVICE
Each variety of hot pepper will have a “days to maturity” listed on the seed packet. Take note when planting. This will be the best way to determine about when your peppers will be ready for harvest.

Harvest hot peppers when they are still green for a milder flavor.

Ripe peppers will pick easily from the vine. No need to cut them off.

You may want to wear gloves and avoid contact with your face and eyes during harvest as the pepper spices can be transferred and may burn.

Do you have tips on when to harvest hot peppers in your region? Let us know in the comments section below.