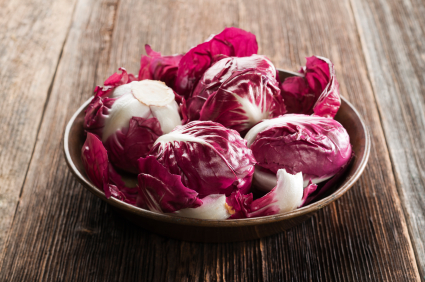 Radicchio, sometimes called Italian chicory, is similar to cabbage and nothing like a radish. Often used as a salad green, the leaves are deep red or purple with white ribs. Radicchio has a strong, bitter flavor (unless cooked) and offers great nutritional value. Here are some tips on how to grow radicchio in the home garden.

WHEN TO GROW
Radicchio is a perennial that will come back year after year once established in your garden. Grow radicchio during the cooler parts of the growing season. Plant in the early spring, about 4 weeks prior to the last frost or as soon as the soil can be worked. Fall crops grow well too. Sow seeds at mid summer in most regions or mid to late fall in the far south or warmer growing climates, usually about 10 weeks prior to the first frost of autumn.

Mature radicchio plants can handle a little frost. Mid summer heat will cause radicchio to go too seed. In warm climates, fall heat can cause immature radicchio to bolt early, so it may be best to only grow in the spring in these regions or late in the fall if winter is mild.

WHERE TO GROW
Radicchio will grow anywhere that has consistent temperatures of 50° F – 70° F for 60 – 90 days. Plant it in an area of the garden that gets full sun. Radicchio will also grow in containers. Provide at least an 8-inch pot for each plant.

PLANTING
Sow radicchio seeds very thinly, only ¼ inch deep. It’s best to just sprinkle soil over them lightly. Keep the soil moist and they should sprout in 6 – 10 days. Thin to 12 inches between plants once they become established.

WATERING & CARE
Water radicchio frequently but lightly. Unlike most vegetables, they do not like long soaks. You may need to water every day during warm weather.

Radicchio will benefit from a thick layer of organic mulch spread around the base of each plant. This will keep the soil moist and prevent root competition from weeds.

DISEASE & PEST CONTROL
In general, radicchio is pretty resistant to diseases. Pests like slugs, caterpillars and aphids can be a problem but the strong flavor of radicchio tends to turn off most bugs and varmints. Keep them at bay by practicing clean, healthy gardening and imploring organic pest control. Beer traps and organic sprays work great when hand picking isn’t enough.

HARVESTING
Harvest radicchio once the entire head is firm. Slice off the entire head at ground level when ripe. Harvest spring crops when the air is still slightly cool and before the heat causes it to go to seed. Harvest fall crops just after the first couple light frosts. The frosts will take some of the bitterness out of the leaves.

TIPS & ADVICE
Radicchio is best eaten fresh. It doesn’t store well, but will last a few day if put in the refrigerator in a plastic bag. Add a wet paper towel to the bag to give it a little more life.

Do you have questions or tips on how to grow radicchio? Let us know in the comments section below.