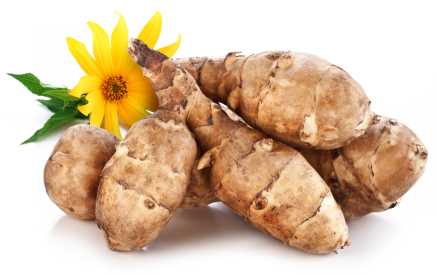 Jerusalem artichokes are a delicious root vegetable, nothing like artichokes, but similar to potatoes. Also known as sunchokes, they are actually a member of the sunflower family and one of the easiest vegetables to grow. In fact, the challenge is in getting rid of them if ever you get tired of having them around. Here’s how to grow Jerusalem artichokes at home.

WHEN TO GROW
Jerusalem artichokes should be planted as soon as the soil can be worked in the late spring, usually about 6-8 weeks prior to the last frost. They will be ready for harvest shortly after the first frost in the late autumn. Grow them in the cooler part of winter in southern zones.

WHERE TO GROW
Jerusalem artichokes can be grown in most regions of the United States but are adapted best to the cooler, northern two-thirds of the country. More southern regions can produce them, but yields tend to be lower. They are not recommended for regions with no frost but they are technically perennial in all growing zones.

Sunchokes tend to take over the space in which they are planted and are very difficult to get rid of once they become established. For this reason, choose an area of the garden that can be dedicated to them for years to come. A separate, contained bed works great. They will do fine in full sun or partial shade. They also grow tall (up to 6 feet), so be sure they won’t shade out smaller plants that need lots of light.

BEST SOIL FOR GROWING JERUSALEM ARTICHOKES
While Jerusalem artichokes can grow in any type of soil, even heavy clay, they prefer loose, fast draining soil. Fertile, sandy loam is best. Amend your garden bed with lots of mature compost or rotted manure.

PLANTING
Jerusalem artichokes grow from the same tubers (also known as root cuttings) that you eat, similarly to potatoes. Plant tubers that have at least 1 bud (eye), but 2-3 eyes is best. Sow them 3-5 inches deep and about 15-24 inches apart with one or more of the buds facing up. Plant them in rows 3 feet apart.

WATERING & CARE
Jerusalem artichokes need very little care to thrive. Mulch early, when they are still young with a few inches of organic matter. This will keep weeds down and make sure they get off to a strong start. Water occasionally. In mild to rainy climates, you may not need to water them at all. In drier climates, one good soak once per week should suffice.

HARVESTING
Sunchoke tubers begin to grow in August, but it is best not to harvest them until after the first couple frosts of the fall/winter kill the foliage. Dig carefully to avoid damaging the tubers. This will keep them fresher longer. Harvest up until the ground freezes.

If you don’t want the plants to grow again the next fall, be sure to harvest every last piece of root and tuber. The smallest tuber can start a chain of more plants to come.

TIPS & ADVICE
Extend the harvest by adding a thick layer of mulch after the first frost.

Jerusalem artichokes are best stored in a cold (32° F) environment with high humidity (85%). Store immediately after harvest and they will keep for several months.

Fresh sunchokes taste like water chestnuts. Try them on your salad or cook them like you would cook potatoes.

Though similar to potatoes, sunchoke tubers do not contain starch carbohydrates, but inulin carbs, which is converted to fructose (not glucose), and can be tolerated by most diabetics.

There are different varieties of sunchokes. They vary in size and flavor. Choose one that is proven to grow in your local climate.