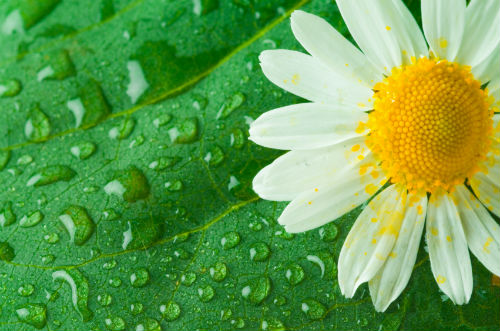 Chamomile is a must have for any herb or flower garden. Its white, daisy-like blossoms are most often harvested to make a delicious, herbal tea but also sweeten the aroma of your garden and bring in bees and other helpful insects. Here are some tips on how to grow chamomile at home.

CHAMOMILE VARIETIES
There are two main types of chamomile: German or Roman. They can both be harvested to make chamomile tea, but the two plants are very different. German chamomile is an annual that can grow up to three feet high. Roman chamomile is a perennial that only grows to about 12 inches, but makes a great ground cover or edge plant. German chamomile is the best type to grow and harvest for tea. This article will focus on this variety only.

WHEN TO GROW CHAMOMILE
Chamomile is an annual that grows over the course of the summer and fall. Direct sow chamomile seeds outdoors after the last frost for your area. You can also start them indoors up to 6 weeks earlier to get a head start.

WHERE TO PLANT
Chamomile grows well just about anywhere. It does not like frost but also doesn’t take long to mature so even the shortest growing regions will see a good harvest. As an annual, you don’t have to worry about bringing it indoors or mulching to protect it over the winter.

Choose a sunny spot for your chamomile. It will also tolerate a little bit of shade, particularly in the hotter regions. Chamomile makes a good border plant, repelling some insects from the vegetable garden.

Chamomile can also grow well in containers. Each plant should have its own 12-inch pot. Chamomile can seed itself pretty well, so growing in pots can help keep it from taking over the garden.

BEST SOIL FOR GROWING CHAMOMILE
Chamomile grows best in loose, sandy soil that drains well. While chamomile will likely grow in even poor garden soil, try to amend it with a bit of mature compost prior to planting. The pH can be fairly wide, but shoot for 6.0-7.0 for best results.

PLANTING
Lightly sprinkle chamomile seeds over your garden bed or in individual peat pots when starting them indoors. Don’t cover them with soil as they need a bit of light to sprout. Keep them moist and place in a sunny window and the seeds should germinate in about 7-14 days. Thin to the strongest seedling per pot. Transplant seedlings outside after the danger of frost has passed. Set them 12-18 inches apart in the garden.

WATERING & CARE
Water your chamomile occasionally. No need to keep the soil constantly moist once it has become established. Try to water just after the top ½ inch of the soil dries out. Rain will likely take care of watering in most regions, but keep an eye on it during long, dry spells.

No need to fertilize chamomile unless you’ve planted in poor soil. Rich soil should sustain them all summer long. Enrich the soil with more compost the following year or use fresh potting soil when growing in containers.

Let a few blossoms go to seed if you want some plants to come back by themselves the following year.

DISEASE & PEST CONTROL
Chamomile is not targeted by many insects. In fact, it can repel some harmful bugs, including cucumber beetles. It also tends to attract many beneficial insects as well. But keep an eye out for aphids. Blast them off with a hose.

Plant diseases are not common with chamomile.

HARVESTING
Harvest chamomile starting about 30 days after the seeds sprout. They should continue to bloom all summer long. Clip the flower petals as needed for tea. Discard the stems.

Fresh blossoms work in tea but you need about twice as many per cup. It’s best to dry them out. Lay them out in a dry place, out of the sun with good aeration. Once dry, use about a teaspoon of dried chamomile flowers per cup of tea.

Chamomile plants will need shade or to be brought indoors when temperatures near 100° F.

Chamomile tea is known for its soothing, calming effects.

Chamomile tea is often used for upset stomach and to help with sleep.