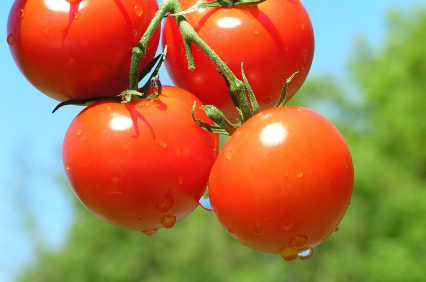 Tomatoes are members of the nightshade family of flowering plants. While botanically classified as a fruit, they are commonly thought of as a vegetable for culinary purposes. Tomatoes contain concentrated amounts of lycopene, antioxidants and other compounds believed to be extremely beneficial to one’s health. There are around 7500 different types of tomato plants – here are 8 of the most popular:

GLOBE TOMATOES
Also known as “slicing tomatoes,” these are the standard or classic type of tomatoes most commonly found in the grocery store. They are medium to large, round and usually red. They are thick skinned and have a long shelf life, which is why they are the most popular tomato for commercial purposes. Globe tomatoes serve a wide variety of culinary purposes.

BEEFSTEAK TOMATOES
Beefsteak tomatoes are similar to globe tomatoes. They are large to very large and tend to be wider than they are tall and thus appear to have an almost flat look in many cases. They have thinner skin and a shorter shelf life than globe tomatoes, making them less practical for commercial purposes. They are commonly used for sandwiches.

CHERRY TOMATOES
Cherry tomatoes are small, usually the size of a common cherry but may be as large as a golf ball. They are generally round or oblong in shape and known for their sweet, juicy characteristics. They are commonly eaten whole, often in salads.

HEIRLOOM TOMATOES
Heirloom tomatoes come in a variety of colors and shapes. They have a short shelf life, often staying ripe for very short periods of time. There are a large variety of heirlooms and they are often popular with chefs.

ROMA TOMATOES
Roma tomatoes, sometimes called plum tomatoes, are most commonly produced to be used in sauce. They are smooth and oblong in shape and are the least juicy of any type of tomato. They are thick and contain very few seeds, which makes them good for use in tomato sauce.

PEAR TOMATOES
Pear tomatoes get their name from their resemblance to pears. While similar to plum tomatoes, they are closer in size to cherry tomatoes. They are commonly used in sauces.

CAMPARI TOMATOES
Campari tomatoes are deep red and known for their juicy sweetness and low acidity. They are larger than cherry tomatoes but smaller than plum tomatoes.

HYBRIDS
Hybrid tomatoes are crossbred from two different varieties of tomatoes. They are usually bred to obtain specific characteristics like disease resistance or a certain flavor. There are hundreds of different types of hybrid tomatoes. Open-pollinated hybrids maintain their parent plants characteristics, which is important if a grower wants to save seed.